During the Sydney lockdown I ordered from a different home cook every Friday night, for me and my neighbours. I discovered each cook from community groups or social media pages for migrant communities in Sydney – east African, Thai, English.

Sometimes the home cooks had a professional social media presence, a delivery provider, or even a website to order from; but often my lead was just a person’s name – I’d then have to find and befriend them on Facebook before asking about a food delivery for the following Friday. Some had menus, others just asked “what do you want?” and let me pick from the full range of their specialty cuisine.

Among many, many other things, I’ve eaten a Georgian grazing box with walnut paste stuffed eggplant rolls; and an Afghan feast so enormous I ate it for almost a week.

I’ve been a food journalist for eight years and I’d never seen most of these dishes in any Sydney restaurants. It wasn’t an expensive novelty either – most of the meals were under $25, and almost all of them were delivered to my door by the person who made them, a friend or a family member.

Sydney, like many major cities in Australia, is full of home cooks who operate like this. You may not have heard of them, because many sell and deliver food just within their communities.

I want to say this practice is on the rise, but I don’t have any statistics. There aren’t any. Many home cooks operate under the table: they may not have registered businesses; they may not have had a council inspection in their kitchen; they might not label all the ingredients in the prepackaged food they’re selling, nor attach a use-by date, and they may not have a food handling certificate – all things you may need to run a food business from your home. The dishes I’ve described were from legally run kitchens, but many of my meals were not.

Late last year the Australian Institute of Food Safety (AIFS) stated food ordered from unregulated home kitchens via social media could be a health and safety risk (particularly for those with allergies), and warned consumers that any business selling through social media was potentially illegal. In a report released on their website, they claimed regulatory bodies and councils were working “tirelessly” to stop unregistered businesses but, due to the new businesses popping up all the time, it’s “difficult to stamp out completely”.

On Facebook Marketplace, WhatsApp, Messenger, Instagram, WeChat and Gumtree, there are home cooks selling everything from elaborate multi-level cakes to traditional Kenyan food. You’ll find food sellers on pretty much any regulation-light online platform that can connect one stranger to another.

Of the 10 or so home cooks I interviewed for this story, those who were unregistered operated that way either because they needed an income, but couldn’t get a working visa or any government support; or because they didn’t think of their practice as a business at all – more of a hobby or a favour to their community.

Some were on their way to being registered as home cooks, or planned to open restaurants once they had enough capital. An SBS Urdu report in 2019 found many home cooks operating in Sydney had little or no knowledge of the regulations.

That was the case with one home cook I interviewed, who makes a specific regional Indian cuisine that is not available in any Sydney restaurant. Originally, she agreed to speak on the record, but I have omitted her name, after it became apparent she had not completed all the necessary steps to operate her business legally.

She says she started her home cooking business after seeing social media comments from people who missed their hometown dishes. “I didn’t think ‘What will happen?’ I just said ‘You don’t need to go to a restaurant, you can just contact me’. I didn’t think I’d get a positive response. I just threw the word out but that night I got seven responses.”

Kalani Oshadi runs Curry House, a Sri Lankan home cooking business which is registered and operates legally, with two fellow hospitality students, Shanilka and Umanda Suraweera. She says in the first few weeks most of Curry House’s customers were friends, and now they’re mainly Sri Lankan people who “have been living here for a long time but they don’t know how to cook”. Oshadi says cooking food for a small community allows them to make more elaborate or difficult dishes.

“It’s much easier in a small community, rather than in a restaurant. If we started with a restaurant, we wouldn’t have lasted long,” she says.

“People don’t know about Sri Lankan food, they might be scared to try. If it’s Italian, everyone knows what Napoletana sauce is. If it’s a jackfruit curry, even you asked so many questions about it. I told you what the food is, how it’s made, why does it taste like this. It takes a lot of time and effort to market just one dish.”

Starting a home cooking business is easy and cheap, compared to the cost of starting a restaurant. There’s no kitchen or dining room fit out; no cutlery and crockery. No marketing, no front of house staff to hire, train and pay, no liquor licence (or expensive supply of pre-purchased liquor) and no extra rent.

For some of the home cooks I talked to, a single Facebook comment or post, or word of mouth through friends, was enough to launch their endeavour. “The capital you need is really low, it’s much easier than doing a market stall,” Oshadi says. “It only costs $20 to market our product on Facebook, it’s much more convenient than doing business the traditional way.”

Unlike a restaurant working with delivery partners like Uber Eats or Menulog, most home cook businesses I spoke with take all their orders well in advance – they designate one or two days for delivery, then only make enough food to fulfil the orders they already have, reducing waste.

Cookaborough, a new app that Curry House has just started using, is designed around exactly that model, as is another Australian start up Food Street. These platforms are more formal than social media sales – both require their cooks to comply with relevant food safety standards and council regulations before registering, which makes them a safer bet for customers.

With so few overheads, it’s far easier to make a profit as a home cook, while for customers, it means lower prices. This would be a win-win situation, provided home cooks followed all the same safety precautions consumers and regulators expect from restaurants.

Oshadi says it is the responsibility of home cooks to get registered. “We’re feeding people. It’s not nice when people don’t go by the regulations, it’s a serious health issue.” She believes non-compliance could put the entire industry at risk. “Even though we’re not a restaurant, we should be treated as one.”

But Nitika Garg, a consumer behaviour researcher and associate professor at UNSW, says that regulatory bodies should be thinking about less onerous compliance practices, as well as education and training, particularly in communities where home cook businesses are widespread.

Garg believes that there are all sorts of reasons people might turn to a home cook, from a perceived authenticity in the idea of home cooking, to the idea that you’re supporting an individual from your community – rather than say, a big corporation.

As it stands now, even interpreting the rules set by Food Standards Australia and New Zealand (FSANZ), and then enforced by state and council authorities, may be difficult for those with limited English language skills. The stakes for home cooks are high too – many councils charge hefty fines for any breaches to the regulation.

When I contacted FSANZ and the NSW Food Authority on the topic of home-based business regulations, neither body claimed to be reviewing the regulations that govern home cooks. The latter says they were working with councils “in response to anecdotal reports of increased at-home food production to further improve monitoring and enforcement”, and the former says they’re reviewing tools food businesses could potentially use to increase health and safety.

“Make it easy for people,” Garg suggests. “Why not get them into the fold?”

Tue Oct 12 , 2021
Cleveland Browns linebacker Jeremiah Owusu-Koramoah has been cleared to travel back to Cleveland after a precautionary stay in a Los Angeles hospital due to a throat contusion. He was released from the hospital Sunday night and will fly back to Cleveland on Monday morning. JOK suffered the bruise to his […] 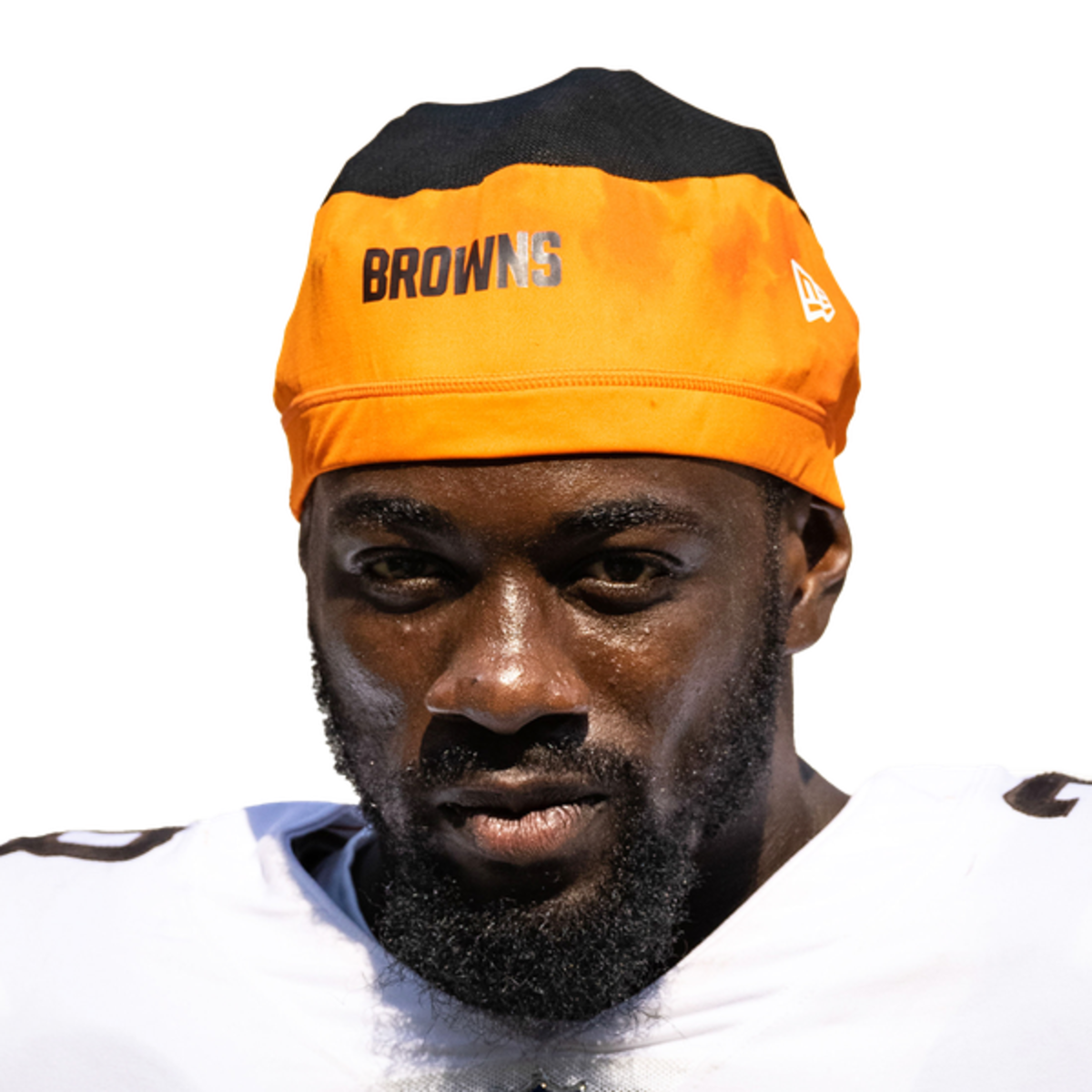