DENVER (AP) — Making an Olympic team is hard enough. This winter, those who earn their spots on the U.S. squad might find it takes even more work to get to Beijing.

Among the slow trickle of information coming out of China in advance of February’s Olympics was news that, with virtually no flights operating between North America and China, Olympians very well might have to get to Beijing through a still-undetermined set of connecting flights that could more than double their travel time.

As things stand this month, most of the 250 or so athletes who make the U.S. team will need to take a charter that connects them to Beijing-bound flights scheduled out of four cities, none of which are in North America.

The uncertainty has turned what is already a logistical challenge — getting all these Olympians and their thousands of pounds of equipment to China — into something even more complex. And it has turned what is already an event beset with unprecedented challenges — less freedom of movement, a vaccine mandate and the prospect of competing in a country that is poised to restrict negative coverage, including over widely documented human-rights abuses — into something even more difficult.

“We’re very used to being flexible with our planning and schedule,” U.S. skier Mikaela Shiffrin said in a recent interview with The Associated Press. “But we very rarely don’t have a plan at all. So that is definitely another added source of stress.”

Difficult travel is nothing new for Olympic athletes, and their schedules have only become more jumbled in the wake of the COVID-19 pandemic that reshuffled competition schedules and, with New Zealand mostly shut down, made it even harder to find snow during the offseason.

The U.S. Olympic team’s sponsor, Delta Airlines, might still be able to arrange charter flights directly from the U.S. to Beijing, but with 11 weeks until the start of the Games, everything is still up in the air.

As of this week, approved flights into Beijing are expected to depart from Tokyo, Seoul, Hong Kong and Paris. The U.S. ski and snowboard team’s tentative plan is to charter flights from Los Angeles to one of the points in Asia, then switch to Olympic charters. Further complicating the issue is that some of these athletes are in Europe for the World Cup season. Without normal commercial options available, the task of moving them around is more difficult.

The U.S. Olympic and Paralympic Committee is ultimately in charge of getting the ski team and the rest of the U.S. teams, outside of hockey, to Beijing. With an extra connection through Asia, or a stop in Europe, travel times could be around double what would normally be a 12-hour journey from the U.S. West Coast to Beijing.

Rick Adams, the USOPC’s chief of sport performance, said everyone was aware that the quick turnaround after the Tokyo Olympics and the COVID-19 protocols “would make planning for Beijing very complex.”

“That said, we pride ourselves on being the best prepared NOC and NPC in the world, and we are exploring all options to get our Olympic and Paralympic athletes — as well as support staff — to the Games safely and efficiently,” he said.

Athletes aren’t the only group being impacted by China’s rulemaking in advance of the Olympics.

The Foreign Correspondents Club of China put out a statement this month complaining of “lack of transparency” from the Beijing Organizing Committee and the IOC with regards to Olympic-related reporting in China.

The organizing committee told China’s Xinhua news agency that it plans on increasing credentials for test events and is assigning staff to manage interview requests and inquiries. The committee said it does not recognize the FCCC.

Most journalists and Olympic support staff also have been on hold in making their travel plans.

Much of the travel confusion stems from U.S. and Chinese carriers’ decisions to reduce the number of flights between the countries from more than 300 a week to single digits. The rollbacks started when demand dropped off sharply in the wake of early COVID-19 outbreaks. The reinstatement of the flights was slowed because of diplomatic wrangling between the countries, along with strict quarantine rules that makes travel to either place difficult. Just this week did the U.S. reopen travel to some foreign visitors who can show proof of vaccination.

The U.S. athletes are now collateral damage in this, as the USOPC negotiates with Delta for charter flights that are expected to cost well into six figures.

Though the extremely limited number of flights between America and China is unique, the U.S. isn’t the only one dealing with an unprecedented amount of uncertainty this close to the Games. A recent search of the Air Canada website offered at least one option for flights between Vancouver and Beijing (with a stop in Shanghai), where similar searches of Delta and United websites offered none between the U.S. and Beijing.

“Planning for these Games has been challenging due to COVID-19, but we experienced similar issues during our planning for Tokyo,” Canadian Olympic Committee CEO David Shoemaker said. “We have no reason to believe that we will have any trouble getting Team Canada to the Games on time and ready to compete.”

Copyright 2021 The Associated Press. All rights reserved. This material may not be published, broadcast, rewritten or redistributed.

Wed Nov 17 , 2021
Quantum computer startup QuEra Computing’s 256-qubit machine and Florian Huber, one of the team of scientist that built the machine are shown in this picture taken in Boston, Massachusetts, U.S., on February 18, 2021. The technology was born in the labs of Harvard University and MIT. It uses neutral atoms […] 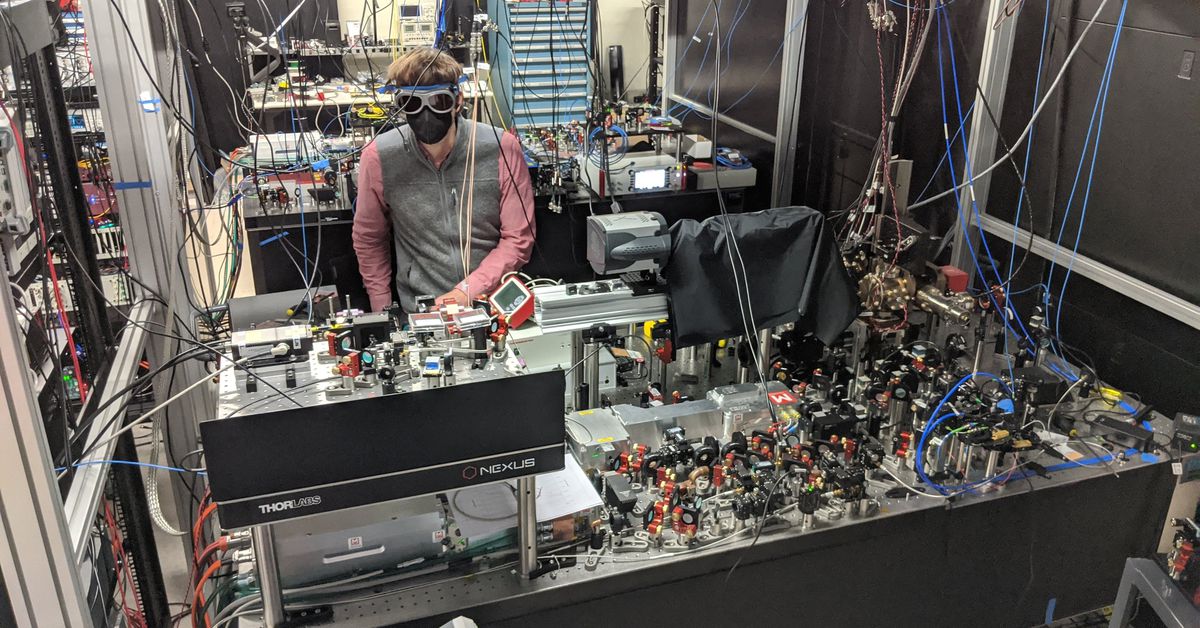