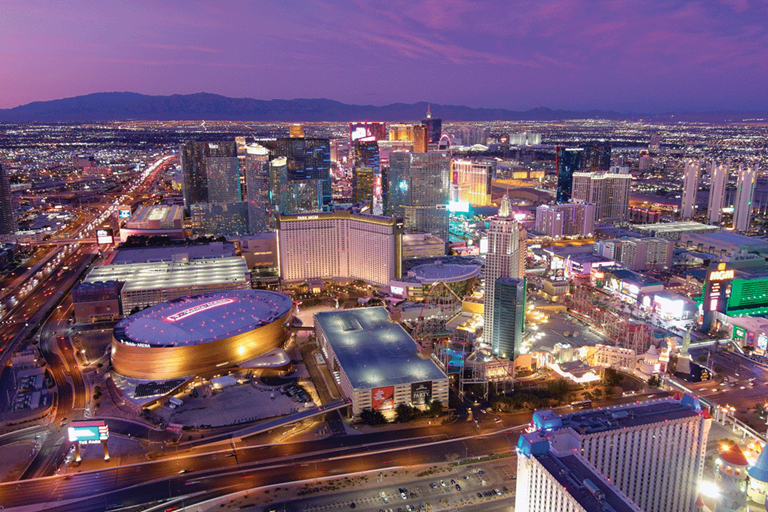 In fewer than six years, Las Vegas has seen the birth of three major league and three minor league teams, and two stadiums and two arenas, which collectively added 104,000 seats to the city’s entertainment venue inventory and an additional 1.5 million in annual ticket sales.

Those with skin in the game say the party’s just getting started.

In the nine months leading up to press time, the Las Vegas Convention and Visitors Authority sponsored 36 sporting events that brought in 962,000 fans, according to Lisa Motley, the organization’s senior director of sports marketing and special events. That number will only go higher now that the market was awarded nine NCAA postseason events over the next four years.

The NCAA had never accepted a bid from Las Vegas until recently, and Motley’s crew bid on more than 100 events. Each of those bids had to satisfy sport-specific criteria, provide various perks, and of course have enough rooms for the participants and fans. With more than 168,000 rooms, Las Vegas has more beds than any U.S. market, according to STR, a division of CoStar Group that provides market data on the hotel industry. The nine NCAA championships on the city’s docket will generate a minimum of 10,000 room nights, according to a tally of the bid documents.

“Division II and III are lucrative and need homes, too. When the next cycle comes around, we’ll go pedal to the metal,” Motley said.

And it’s not just college sports that represent future growth for the city.

Just over 3 million people visited Las Vegas from outside North America between 2015 and 2019, according to LVCVA data analyzed by Sports Business Journal. Overall, 13.1% of those overseas travelers indicated that they were attending a sporting event.

Sports travel made up:

$41 million, or 8%, of the total domestic travel market in 2018, resulting in 190 million domestic trips to attend or participate in a sporting event.

On average, sports travelers spend 3.9nights at a destination.

The average party size for sports travelers was 3.2 people — slightly larger than for leisure travelers overall.

Source: U.S. Travel Association’s 2019 “The Impact of Sports on the Travel Industry” report

That means last month’s announcement that Formula One will stage a Saturday night race on the Strip in November 2023 could wind up being the most-attended entertainment event the city has ever hosted — an honor that belongs to the Grateful Dead, whose final performance in Las Vegas, a 1995 Sam Boyd Stadium show, drew 125,533 fans —  as well as the market’s largest international TV audience. The LVCVA projects that F1 spectacle will generate 400,000 hotel room nights, and that the tourism organization will shell out more than $18 million in fees and costs over the three-year contract.

Also last month, Oak View Group announced that it has acquired 25 acres in Las Vegas and will build a $3 billion entertainment district including a 20,000-seat arena, casino and hotel. The company does not think the city is near its seating capacity saturation point.

“This town thrives on evolution, and Vegas needs another state-of-the-art arena,” said former Las Vegas Raiders President Marc Badain, who is leading the effort for OVG. “Look at the historical growth patterns of Las Vegas. The city never falls behind. The growth of population and tourism and venue developments all rise about every 10 years. By the time our new building is online, it will mirror the next wave of population and tourism growth.” 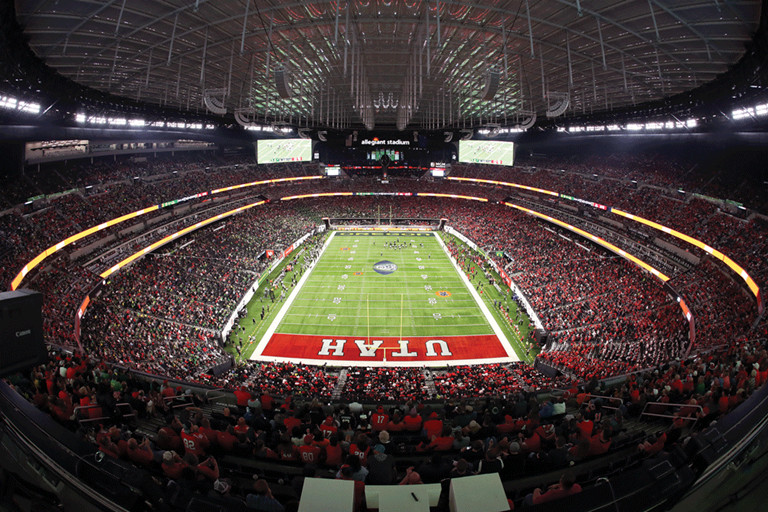 Allegiant Stadium hosted its first Pac-12 Football Championship last December and will be the site of Super Bowl LVIII in 2024. getty images

The venue will be built to NBA standards, just in case, and the site is adjacent to a 110-acre plot that is expected to house a new stadium, should MLS decide to expand there.

And the Oakland A’s, who have been openly exploring a possible relocation to Las Vegas, have selected five area sites for a proposed $1 billion, up to 35,000-seat, retractable-roof ballpark.

Appropriately, the advertising and marketing budget for the LVCVA, Southern Nevada’s official destination marketing organization, is projected to be $90 million in fiscal year 2022-23, up 10% over this year’s outlay.

The goal, of course, is to drive hotel revenue, said Dale Eeles, vice president of Las Vegas Events, the private, nonprofit group that bids on and produces events with the rights holder.

“We all win when we sell rooms,” he said.

The city’s hospitality brands are also getting more involved with the bidding process.

Eeles joined the 15-person, privately funded organization in 2005 as director of corporate marketing and was promoted to his current role in 2012. He developed the idea for the Rock ‘n’ Roll Marathon to run at night on the Strip, thereby creating a unique event and enticing participants to stay in town an extra night.

MGM Resorts International, for example, was the lead bidder that secured the rights for the NCAA’s 2023 Division I Men’s Basketball Regionals and the 2026 Division I Men’s Frozen Four. Both events will be held at T-Mobile Arena, which is a joint venture between MGM Resorts and AEG and the home to the NHL’s Vegas Golden Knights, who assisted with the bids.

“Our initial strategy nine years ago was to align with NACDA in the hopes building relationships with the athletic directors could help influence policy changes at the NCAA,” said Daniel Rush, MGM Resorts’ vice president of global sports and events sales. “Ultimately it did.”

Rush said that all room blocks associated with the basketball regionals and the Frozen Four are slated to stay at one of MGM Resorts’ 13 nearby properties, all located within two miles of T-Mobile Arena.

Additionally, the South Point Hotel Casino & Spa, located about 15 minutes from the Strip, will host the 2023 NCAA National Collegiate Women’s Bowling Championship, and MGM, Caesars and Wynn Resorts were instrumental in attracting the F1 race.

The newness of all the teams, venues and events means that it is too early to measure the returns on the city’s sports investments, Motley said.

“But we are spending more on sports. We will continue to invest in all types of sports programming.”

Fri Apr 22 , 2022
David Gilberto, owner of South Shore-based Finishing Touch Building & Remodeling, said he’s booking jobs months in advance. The projects keep flowing in and show no signs of slowing down.  When the world shut down amid the COVID-19 pandemic, the construction industry ramped up. Construction workers, deemed essential workers in Massachusetts, remained on the job and homeowners took advantage […] 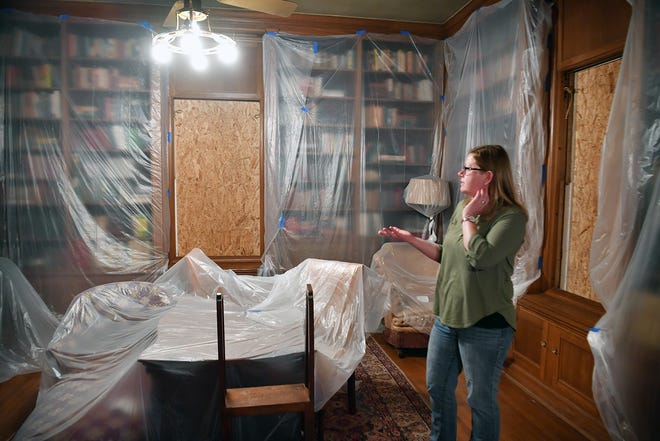