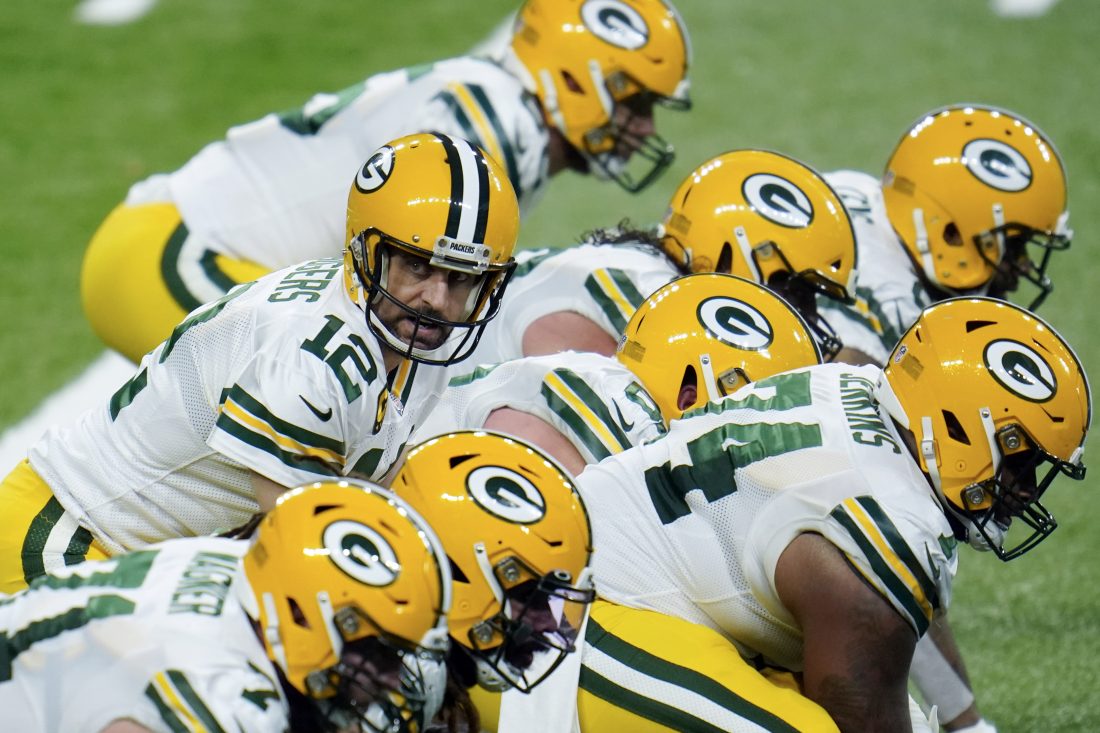 In this Dec. 13 file photo, Green Bay Packers quarterback Aaron Rodgers gets set at the line of scrimmage against the Detroit Lions in Detroit. After a tumultuous offseason in which his future with the Packers appeared in doubt, reigning MVP Aaron Rodgers is ready to begin his 17th — and perhaps final — season in Green Bay.
(AP Photo/Paul Sancya, File)

GREEN BAY, Wis. (AP) — Packers quarterback Aaron Rodgers acknowledges this season feels different because of the uncertainty surrounding how much longer he and some teammates might remain in Green Bay.

But he doesn’t believe those questions will hinder his focus as the reigning MVP heads into his 17th — and perhaps final — season with the Packers.

“I’m speaking personally and I can’t speak for everybody,” Rodgers said Wednesday. “But the feel that I get with the energy in the locker room is not pressure. It’s focus. I think it’s the right perspective and the right type of focus. We know we have a talented team. We know what the expectations are.”

The Packers open their season Sunday against the New Orleans Saints at Jacksonville, Florida. Green Bay has reached the NFC championship game in four of the last seven seasons and lost every time — including the last two years.

“This is probably the hungriest team that I’ve ever been around, honestly, just because we have been so close a number of times now,” All-Pro receiver Davante Adams said.

Rodgers skipped the Packers’ organized team activities and mandatory minicamp in a standoff with team officials before reporting to training camp on time. Rodgers wants to have input in the team’s decision-making process and has said he doesn’t know whether he will remain in Green Bay beyond this season.

Adams could become a free agent next year and said Wednesday there’s no chance he will sign a contract extension before Sunday’s game. Other Packers with contracts expiring at the end of the season include receivers Allen Lazard and Marquez Valdes-Scantling and tight end Robert Tonyan.

The potential for roster turnover is creating a sense of urgency.

“We’re just focusing on accountability and holding each other accountable because regardless of what happens with any of our situations, this group will not be together the way it is now in years down the line,” Rodgers said. “So we’re going to enjoy this year for all that it has to offer, and each other, and I think that’s the right perspective to have when you get in this situation.”

Rodgers is coming off one of the best seasons of his Hall of Fame-caliber career. He completed 70.7% of his passes for 4,299 yards and 48 touchdowns with five interceptions, earning his third MVP award and helping the Packers score a league-high 31.8 points per game.

He led the NFL in passer rating, touchdown passes, completion percentage and interception percentage, becoming the first player since Steve Young in 1992 to top those four categories.

“You don’t want to rest on past merits, which I know he doesn’t,” coach Matt LaFleur said. “He definitely put the work in. But I think he’s in a really good headspace. And I think he’s got the right mentality, the right mindset.”

The 37-year-old Rodgers has experienced enough to understand how to maintain focus and not get caught up in the pressure that accompanies high expectations. He’s seeking his second Super Bowl berth after leading the Packers to a title in the 2010 season.

“I’ve been around a long time in this league,” Rodgers said. “I’ve seen a lot of ball and I’ve learned how to channel my energy and my focus to things that get me in the right headspace or perspective, whether it’s the stuff that I do off the field, the meditation helps a lot, too. But I try and pass that stuff along as well.”

Rodgers acknowledges he has adjusted his leadership approach over the years as the age gap between him and his younger teammates has widened.

“We had a nice conversation with some of the rookies on Monday and the message is what the accountability is and the expectations are, and also how to navigate this year,” Rodgers said. “And it’s a good reminder for all of us, the challenges that we all face, whether we’re a first-year player or 17th-year player, in staying in the moment, staying present, staying positive, staying focused on what you have to do, not making the moment bigger than it actually is.”

TURNOVER DIFFERENTIAL: Packers plus-7; Saints plus-9.

SAINTS PLAYER TO WATCH: RB Alvin Kamara was the centerpiece of New Orleans’ offense last season and should be again following the retirement of NFL all-time leading passer Drew Brees. In 2020, Kamara led the Saints with 932 yards and 16 TDs rushing and with 83 receptions for 756 yards. His 21 TDs from scrimmage led the NFL.

KEY MATCHUP: Adams against Saints top CB Marshon Lattimore. This marquee matchup didn’t take place last season because Adams sat out with an injury. Lattimore, the Saints top draft choice in 2017, when he was also Defensive Rookie of the Year, is now in the final year of his contract and looking to build on his credentials as an elite pass defender.

KEY INJURIES: The Packers are playing without All-Pro OT David Bakhtiari, who is opening the season on the physically unable to perform list after tearing his left anterior cruciate ligament on Dec. 31. … The Saints will be without top WR Michael Thomas, who also is on the PUP list because of ankle surgery in June.

SERIES NOTES: The Saints have won two of the past three meetings, in 2014 and ’17, and are 4-2 against Green Bay with Sean Payton coaching (not counting a 2012 loss to the Packers when Payton was suspended). … Rodgers is 3-2 in career starts vs. New Orleans with 1,580 yards and 13 TDs passing against six INTs.

STATS AND STUFF: The game was moved out of the Superdome and to Jacksonville because the New Orleans area is recovering from Hurricane Ida. It’s the first Saints home game scheduled for the Superdome to be moved since Hurricane Katrina displaced the club in 2005. The only other Saints home game played outside the dome since then was part of the NFL’s international series in London.

… Packers K Mason Crosby has made 18 consecutive field-goal attempts. The only two longer streaks in team history also were Crosby’s. He made 23 straight from 2010-11 and 19 in a row from 2013-14. … Green Bay has won its season opener each of the last six years, matching the Kansas City Chiefs for the NFL’s longest active streak.

… QB Jameis Winston, a 2015 first overall draft choice by Tampa Bay, is slated to make his first start for New Orleans since joining the Saints in free agency in 2020.

… Saints DE Cameron Jordan had 7 1/2 sacks in 2020 and ranks fourth in the NFL with 93 1/2 sacks since 2012. He also is the only player with at least seven sacks in each of the past nine seasons. … Saints LB Demario Davis has at least 100 tackles in each of his past four seasons. Davis and Tampa Bay’s Lavonte David are the only LBs with at least 400 tackles and 40 or more tackles for losses since 2017.

FANTASY TIP: The Saints have been scrambling to find a second starting caliber cornerback, and also have had turnover on the interior defensive line. So Rodgers could have time to throw and find weaknesses to exploit in the Saints’ pass coverage — even if Lattimore contains Adams, which is no sure thing.

10 Home Renovations That Will Decrease Your Property Value

Sat Sep 11 , 2021
Some renovations are simple ways ways to increase the value of your home. But design tweaks that some believe to be upgrades can cost homeowners money when it’s time to sell. A new report from GoBankingRates identified 10 home renovations that hurt property values. For homeowners, making investments in your […] 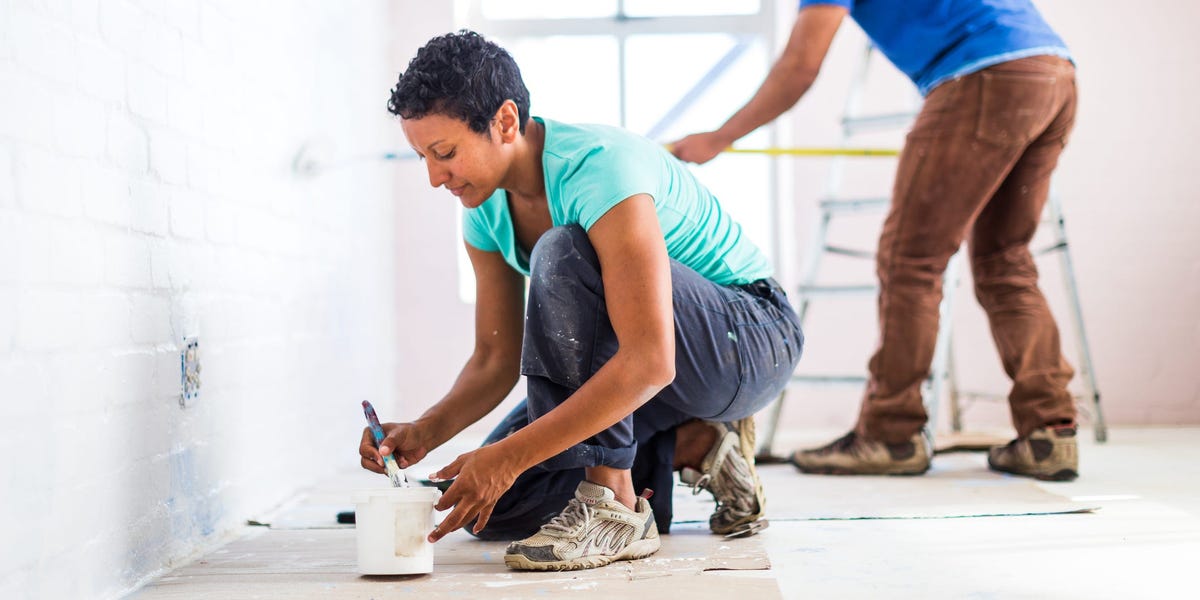