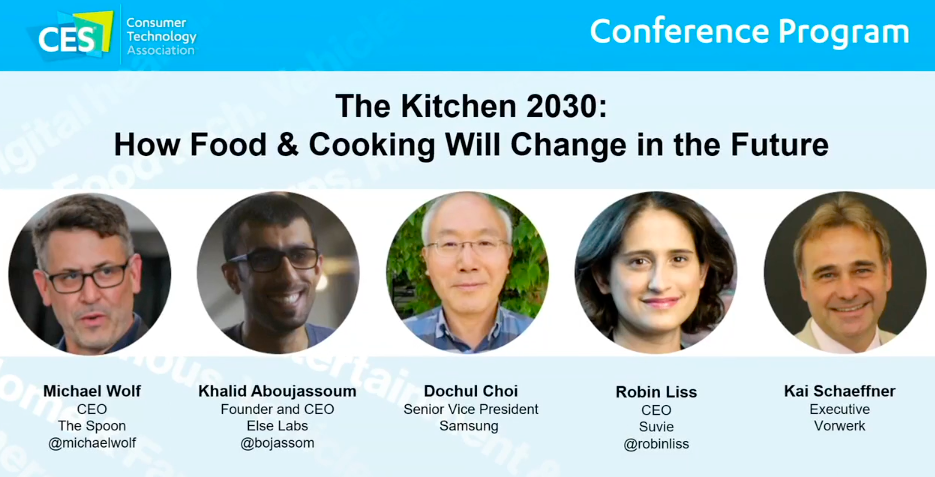 If you’ve been following The Spoon since the early days of 2015, you might remember that our flagship event that started it all was the Smart Kitchen Summit. Dedicated to the quiet revolution that was happening in the consumer kitchen, SKS became the event to examine the tech disruption upending business models and changing the way we source, cook and eat our food forever.

So it was fitting that our opening panel at the first CES Food Tech Conference was “The Kitchen 2030: How Food & Cooking Will Change in the Future,” featuring some of the leading companies in the kitchen and appliance industries. The panel discussion was hosted by Michael Wolf, CEO and founder of The Spoon and included Khalid Aboujassoum, Founder & CEO of Else Labs, Dochul Choi, Senior Vice President at Samsung, Robin Liss, CEO at Suvie and Kai Schaeffner, executive at Vorwerk (Thermomix).

The panel talked about where and how cooking, storing and even shopping for foods has shifted in the last several years; with more transparency and information about the foods we eat, the digitization of the recipe, guided cooking features and a whole new wave of kitchen appliances that may change the entire layout and function of the consumer kitchen.

“The Kitchen 2030” panel can be viewed in its entirety below — leave a comment with your predictions for the next decade of innovation in the connected kitchen.

Fri Feb 18 , 2022
Travel Michigan Vice President Dave Lorenz visits Travel Marquette to talk about the UP200. Lorenz will be attending various UP200 events this weekend. (Journal photo by Taylor Johnson) MARQUETTE — The UP200 is back in action after being canceled last year due to COVID-19 precautions. Dave […]