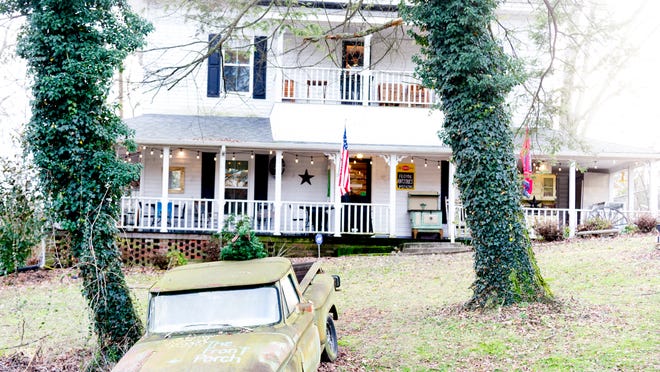 Shirley’s boy, Ken Huddleson, knew he had to get his priorities in order.

In the process, he’s had to leave his comfort zone.

After being the head chef at The Front Porch in Powell for several years, Huddleson left to take over the kitchen at The Main Event in Knoxville. Last winter, he came to the conclusion that running a kitchen anywhere isn’t conducive to the family life he envisioned.

“I want to be involved with my kids,” Huddleson said of his 10-year-old son and daughter, 13. “Being a kitchen manager just won’t let that happen.”

So, instead, Huddleson became his own boss. He took his recipes — especially the chicken ‘n dumplings — that were favorites at The Front Porch and opened his own food truck: Shirley’s Boy Country Cooking.

Chef answers to a tough boss

The name of the trailer, which looks more like a tiny house than a food truck, is in honor of Huddleson’s mother, who first brought him into the kitchen.

“My mother passed away when I was 10,” Huddleson said. “She first got me into the kitchen, then my stepmom helped me develop the passion for cooking.”

Huddleson said when he was 5 his father would bring him to the machine shop where he worked.

“At lunch time, the ol’ ‘roach coach’ would pull up and serve food for the workers,” he said. “Ever since then, I had always wanted to have a food truck.”

Once Huddleson took the plunge, he also took on the responsibility of working for a tough boss: himself.

“I don’t feel contained,” he said. “If something needs to get done, it’s up to me. Food prep. Cleaning up. The ball is in my court. It’s my job to make the ball roll.”

It’s also Huddleson’s job to make sure he’s got a venue to sell his food. That means contacting people in charge of festivals and events to secure a spot, which isn’t really in his personality.

It’s not the human contact that is unnatural for Huddleson. In fact, he thrives on the response he gets from his customers.

“I try to put my twist on everything I make,” Huddleson said. “I like it when I can hand the food to someone and they’ll say, ‘Wow, this is ridiculously stupid good!’”

That’s been the response he has gotten from his signature item, chicken ‘n dumplings. His wife, Brittany, has taken time planning three weeks’ worth of food selections, so each day will have new items. However, the ever-popular chicken ‘n dumplings will almost always be available.

“It’s made from scratch with pure love,” said Huddleson, not giving away any secrets.

“I’ve made it 500 times. I’d like to get to a point where I could sell it fresh in a retail situation.”

Of course, there are some strange combinations that Huddleson has found will work together. Put Mandarin orange slices with Cayenne pepper and sugar together, shake and put on top of a salad.

Huddleson said he plans to be at the Powell Food Truck for breakfast (lemon-blueberry French toast and biscuits and gravy are specialties) a few days a week, while firming up the rest of his calendar around his son’s travel football trips (where he can set up his tiny house and sell food at games).

“I’ve worked full-time, putting money in someone else’s pocket, since I was 14,” Huddleson said. “I like the fact that I don’t have to punch a time clock now.”

The state of sport: Outside of masked travel, 2021 fall sports season set to kick off with fairly 'normal' schedule of events

Sat Aug 28 , 2021
After more than a year of trials, shut downs and confusion surrounding high school sports and activities in Minnesota, the 2021-22 school year is offering the hope of moving toward normalcy. The state of sport as indicated by the Minnesota State High School League (MSHSL) and Pipestone Area Activities Director […]