Skip to content
NEW YORK, March 14, 2022 — A research team led by Andrea Alù at the City University of New York (CUNY) and Heedong Goh at the Advanced Science Research Center at the CUNY Graduate Center (CUNY ASRC) developed a design for a nano-size, wave-based computer that solves advanced mathematical computations at the speed of light. The advancement stems from the researchers’ investigation insight into how nanomaterials interact with lightwaves, which could step up the development of small-but-mighty, low-energy optical computers for practical use.

Scientists have shown that it is possible to achieve more efficient computing through optical devices that use interactions between metamaterials and lightwaves to apply mathematical operations to incident waves. Although these computers can perform calculations faster and with less energy than conventional computers, they require extensive footprints and precise, large-area fabrication of the components. Because of the computers’ size, they are difficult to scale and integrate into networks.

“The increasing energy demands of large data centers and inefficiencies in current computing architectures have become a real challenge for our society,” Alù said.

The researchers’ device addresses the growing need for scalable computers that can solve a myriad of complex problems quickly. Whereas previous designs have used large-area metamaterials that limited scalability, the CUNY team engineered the structures at the nanoscale to support scalability and practical applications.

To build their computer, the team formed silicon into a nano-size geometrical shape that is optimized for solving a specific problem. When the computer is interrogated with lightwaves carrying an arbitrary input signal, it encodes the solution corresponding to the mathematical problem into the scattered lightwaves. The solution is calculated at the speed of light, with minimal energy consumption.

The nonlocal response of the compact light scatterer is engineered to convey the selected operations on arbitrary impinging waves, and it even solves integro-differential equations. The solutions appear in the scattered fields. The lack of strongly resonant phenomena makes the response robust, and the small size of the computer allows for the cascading of processes.

“The very small size of these nanoscale optical computers is particularly appealing for scalability, because multiple nanostructures can be combined and connected together through light scattering to realize complex nanoscale computing networks,” Goh said.

To date, optical computers that perform superfast computations based on the interactions between light and metamaterials have been too large for practical application. 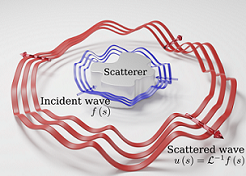 A team at CUNY introduced a design for a nanosize optical computer capable of performing advanced mathematical computations at the speed of light. Scattered waves from a nanoscale object encode the solution of a complex mathematical problem when interrogated by tailored input signals. Courtesy of Heedong Goh.

“Our work demonstrates that it’s possible to design a nanoscale object that can efficiently interact with light to solve complex mathematical problems with unprecedented speeds and nearly zero energy demands,” Alù said.

The nanosize optical analog computer presents a step toward the realization of ultracompact, low-energy-use computers capable of complex mathematical computations.

“This finding is promising because it offers a practical pathway for creating a new generation of very energy-efficient, ultrafast, ultracompact, nanoscale optical computers and other nanophotonic technologies that can be used for classical and quantum computations,” Goh said.

Mon Mar 14 , 2022
It is not often that people are walking around wearing clothes they made for themselves, but this isn’t the case for Lillian Maple, a junior fashion merchandising major at the University of Georgia. Since the beginning of the COVID-19 pandemic, many people have picked up a new hobby like gardening […]